brought to you by – Sherrard Kuzz LLP Employment & Labour Lawyers

First announced as part of the 2014 Ontario Budget, the Ontario Retirement Pension Plan (“ORPP”) is a new, provincially managed pension plan for employees working in Ontario initially scheduled to take effect in 2017. On February 16, 2016, Ontario Finance Minister, Charles Sousa, announced a one year implementation delay (to 2018) to allow for negotiations with the federal government regarding a possible enhancement to the Canada Pension Plan (“CPP”). In many ways the ORPP is similar to the CPP – both require contributions from employees through payroll deductions, as well as matching contributions from employers. While possible expansion of the CPP has cast some doubt on the future of the ORPP, at least for now public pension reform in Ontario remains advertised as a two-pronged approach – ORPP implementation occurring simultaneously with CPP reform.

What retirement benefits will the ORPP provide?

Starting in 2022, a retiree who has made contributions to the ORPP will be eligible to draw retirement benefits at age 65, with options to receive adjusted benefits as early as age 60 or as late as age 70. The value of benefit payments will vary depending on the employee’s earnings and the number of years of contributions. However, the plan was designed to provide up to a 15 per cent income replacement rate for persons who have contributed over a 40 year period. Retirement benefit payments will be indexed to inflation. The ORPP also provides for survivor benefits to a spouse, beneficiary or estate.

How much will the ORPP cost?

Once fully implemented, the total contribution rate per employee will be 3.8 per cent of employment income up to $90,000 per year. The first $3,500 of income will be exempt from the ORPP contributions, as will all income earned by an employee less than 18 years of age or over the age of 70. The 3.8 per cent contribution will be split evenly between employer and employee – 1.9 per cent being contributed from each. 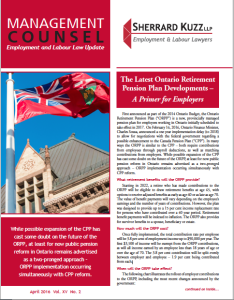