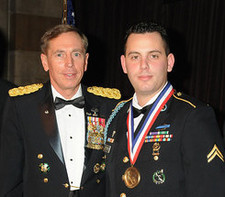 Original article can be found in the LaborPress – October 14, 2015
By Joe Maniscalco

New York, NY – Four years ago, Local 361 apprentice Rob LeFurgy wasn’t even sure what an ironworker did. All the decorated Iraqi war veteran knew for certain was that he sorely missed the brotherhood and sense of higher purpose he had known serving in the U.S. Army. Becoming an ironworker, however, has gone a long way to satisfying those intense feelings of longing and restoring the 28-year-old Oakdale, Long Island resident’s hope in a brighter future.

“This union turned my life around,” LeFurgy says. “No one can relate to what I did over there, but these guys come really close.”

LeFurgy first met Local 361 Business Manager Matt Chartrand during a particularly dark time in August of 2011. Having survived the war in Iraq and dedicating himself to earning a degree in International sales & marketing, LeFurgy, nevertheless, found himself in the grips of a grim lethargy that simply would not relent.

“I was an American soldier, and I could anything,” Lafarge says, “But nothing interested me.”

In 2007, the proud ironworker was on patrol with 1st Sergeant Jeff McKinney in Adhamiya, Iraq, when the 40-year-old  family man from Garland, Texas, took his own life. LeFurgy later survived his own near-death experience shortly after when a roadside explosive blew up, flipping the battle vehicle he was riding in, and pinning him against its twisted turret.

“I always knew I wanted to be in the military,” the former West Sayville firefighter says. “My mother didn’t want me to go. My brother was in the Coast Guard, but they kept on rejecting me because of my tattoos. So, I went with the Army.”

LeFurgy, however, never talked about his military service when Chartrand offered him an opportunity to become a union ironworker through the Helmets to Hardhats program.

LeFurgy’s first job brought him to the Gowanus Expressway in Brooklyn, where the kinship he immediately established with his new brethren helped him more fully engage with society once again. It also helped him realize that after all he had been through in Iraq, seeking therapy was a smart move.

“They took me under their wing,” LeFurgy says. “Working with these guys made me realize what I had to look forward to — this was a place to belong.”

In the Army, LeFurgy found a fraternity of people dedicated to both each other, as well as a deep desire to achieve something beyond themselves. He’s since rediscovered those same things as a third-year Local 361 apprentice connecting steel and dropping columns.

LeFurgy recently proposed to his fiancee Nicole, and the two plan to marry in 2017.

“The union saved me, my family supported me, and my fiancee gave me new life,” LeFurgy says.