This afternoon Ontario’s Minister of Finance, the Hon. Victor Fedeli, revealed the Government of Ontario’s 2019 Budget. Titled Protecting What Matters Most, the document is focused on a five-year path to a balanced budget, a continued commitment to reduce regulatory burdens for business, significant spending in infrastructure including subways and investments in child care.

The Budget also contains several initiatives that are of interest to Ontario’s unionized ICI construction sector:

The Province committed $11.2 billion towards four GTA rapid transit projects in its biggest infrastructure funding announcement in the 2019 Ontario Budget. This represents an increase compared to $5 billion that was previously committed by the Ontario government. The commitment amounts to approximately 39% of the $28.5 billion total estimated cost of the four transit projects. The Province notes that it expects the federal government to contribute 40% of the total project cost, and plans to negotiate funding agreement with the City of Toronto and York Region.

The four projects that the Province plans to fund are the “Ontario Line” (a downtown relief line for Toronto), an extension of the Yonge Subway Line to Richmond Hill and Markham, an extension of the Eglinton Crosstown LRT to Pearson Airport, and the completion of the Scarborough Subway Extension.

The 2019 Ontario Budget notes that the Province is adopting a market-driven Transit-Oriented Development Strategy which is intended to reduce the Province’s financial burden by leveraging third-party investment. Through this strategy, developers could build mixed-use buildings above transit facilities in exchange for building new transit infrastructure. The Province plans to build new Mimico and Woodbine Go stations with this strategy.

The Province is planning to spend $16.6 billion on infrastructure in 2019-20 (including $1.9 billion in third-party investment), slightly less than the $17.2 billion that was spend in 2018-19. One third ($5.5 billion) of the infrastructure expenditure planned for 2019-20 will go towards transit projects. Expenditure on provincial highways, education (not including post-secondary), and hospitals will be well above $2 billion in each sector in 2019-20 as it was in 2018-19. Justice infrastructure will nearly double in 2019-20 to $762 million, likely because of courthouse projects in Toronto and Halton, and several OPP detachment projects around the province. Investment in postsecondary education infrastructure was $902 million in 2018-19, and the Province plans to spend $351 million in 2019-20. 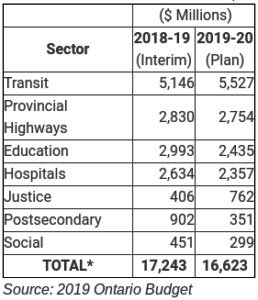 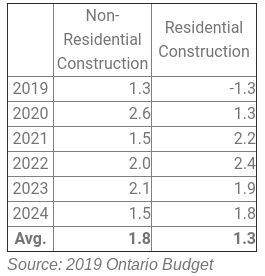 The Province is aiming to strengthen the education system in Ontario with specific emphasis toward math, science and financial literacy as well as the skilled trades. A continued focus towards the promotion of apprenticeship and the skilled trades as a pathway choice will also be included for all students from kindergarten to Grade 12.

The 2019 Ontario Budget includes a plan to address the skills gap and the continued need for tradespeople through the promotion of the skilled trades and the hiring of apprentices to business. The closing of the skills gap by promoting the skilled trades would also include a focus on retraining and the benefits of trades, and a review to increase access to opportunities. This plan also includes a proposed further reduction in regulatory burdens placed on businesses, apprentices and journeypersons. No specific details were provided on this program.

The government is creating more opportunities for Indigenous peoples and addressing the skilled labour shortages across the North by creating a new Northern Ontario Internship Program. The program will now remove the requirement that applicants be recent university or college graduates. Program candidates will now include new entrants into the workforce, those transitioning to a new career, the unemployed and underemployed.

One of the funding streams is specifically focused on skilled labour to address the issue of skills shortages in northern communities.

More information and a digital copy of the 2019 Ontario Budget can be found here: http://budget.ontario.ca/2019/contents.html